Something I thought I’d never see in my lifetime happened.

Georgia won their first national championship since 1980. I’m not a UGA fan at all so I was shocked they finally beat Alabama.

Kirby Smart lost his previous four meetings to his old boss, Nick Saban. In his case the fifth time was a charm. It was a close game through three quarters, but Georgia won 33- 18.

“I told the guys in the locker room, just take a picture of this, because I think back to the ’80 championship picture and seeing all those players and the Frank Walkers and the Herschel Walkers and all these people that have reached out and said things,” Smart said. “Our guys have accomplished that, something special, and as they say, they’ve become legendary, and I want that for them.”

The teams traded field goals in the first half and Alabama took a 9 – 6 lead into the locker room at halftime. In the SEC Championship win, the Crimson Tide lost wide receiver John Metchie III with a torn ACL. He leads the team in receptions with 96 and he was second in receiving yards with 1,142.

The other star receiver, Jameson Williams suffered a knee injury in the first half after catching a 40-yard pass. Williams is the team leader in receiving yard with 1,507 yards.

The first touchdown came with 1:20 left in the third quarter. James Cook broke a 67-yard run to get the Bulldogs in the red zone. Three more running plays and a facemask penalty by Alabama got them into the end zone. Zamir White went in standing up from a yard out. It gave Georgia their first lead, 13 – 9.

Alabama added another field goal after that. They got the ball back on a play that was ruled a Stetson Bennett fumble. It looked like he was trying to throw the ball away and the ball rolled out of bounds. Bama’s Drew Sanders casually caught it jogging out of bounds.

They got the ball in the red zone and Bryce Young threw a 3-yard touchdown to give them an 18 – 13 lead.

Bennett was 13 for 22 for 141 yards as the next drive started. He completed all three of his passes for 68 yards, including a long strike to Mitchell for a touchdown with 8:09 left that gave the Bulldogs a one-point lead after a failed 2-point conversion.

The Georgia defense forced a three and out and got the ball back for the offense to seal the win. UGA scored 20 points in the fourth quarter.

With less than a minute remaining in the game, UGA corner, back Kelee Ringo intercepted Young and returned it 79 yards for a touchdown.

“I hadn’t cried in — I don’t know, years — but that just came over me,” said Bennett, who was named the offensive player of the game. “That’s what — when you put as much time as we do into this thing, blood, sweat, tears, it means something.”

“We had a lot of opportunities, moved the ball relatively well. We did some stuff well. We didn’t execute, and at the end of the day, that’s on me,” said Young.

“We played a heck of a game against a heck of a team for the first three quarters of the game,” said Saban. “Nobody can take the SEC championship away from this team, the Cotton Bowl championship.” 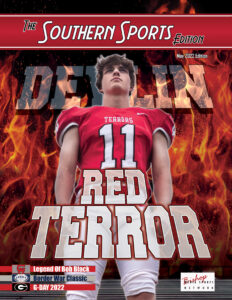