The NBA Draft has come and gone for another season. In recent years the draft has not been very deep. In most scenarios if you do not hold one of the first three of four picks then you are not drafting a franchise-type player.

This draft was no different. Many experts believed the first four players taken were players that could change the fortunes of an organization but after that, such impact players did not exist.

There were no surprises at the top either. The Orlando Magic took Paolo Banchero number one overall.

Banchero was a star at forward for the Duke Blue Devils. The true freshman averaged over 17 points per game and over 7 rebounds per game.

Banchero is 6’10-250 pounds. He has great size and has a good NBA body. I think Banchero will find success in playing down low and being physical in the NBA, more than he will find with playing at the top of the key and being the main option.

Don’t get me wrong, I think Banchero will be a solid NBA player, but I don’t see him as a superstar; he is a good building block and will be a great core piece for the Magic.

The Atlanta Hawks had the 16th overall pick and with it selected another Duke F, AJ Griffin.

Griffin also has an NBA-ready frame, at 6’6 220 pounds. Griffin started slow for the Blue Devils but became crucial for Duke during their late season run.

Griffin has NBA pedigree as well. He is the son of NBA veteran and Toronto Raptors assistant coach Adrian Griffin. Griffin was also a McDonald’s All-American and was considered one of the top 15 players in last fall’s incoming freshman class.

Missing much of the preseason with a leg injury, the New York native got off to a slow start in his lone collegiate season. Griffin also made the ACC All-Rookie Team. He averaged over 10 points per game for Duke.

What I like the most about Griffin is the ability for him to create his own shot. This will help the Hawks if he can improve on his ball handling and quickness.

The Magic also took Caleb Houstan. Houstan was a F out of Michigan, 6-8 205 pounds. Houstan was the 32nd overall pick.

The Hawks would have had the 44th pick but it was traded to the Golden State Warriors.

The first 5 picks of the NBA Draft were as follows: 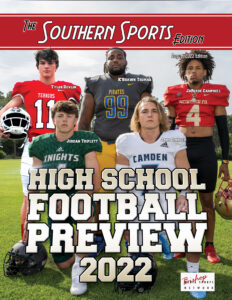