The last few years the Glynn Academy Terrors have had successful seasons, but often ending just short of their goals in the GHSA Playoffs.

Rocky Hidalgo and his staff are hoping to continue the regular season success and make a deep playoff push. They will put their best foot forward heading into the 2021 season with a new name under center.

A season ago the Terrors were able to win a share of the region championship and are only looking to build on that success with rising Junior, Tyler Devlin at the helm of the Glynn Academy offense.

Rocky Hidalgo and his coaching staff are looking forward to seeing how exactly Tyler’s game can help propel the Terrors into a state title contender.

Devlin began his high school career at the GISA-AAA School, Frederica Academy, starting as a freshman before deciding to transfer out and attend the much larger Glynn Academy.

Devlin said “he just felt like it was the right time” when asked why he decided to transfer and has done considerably well with all of the different hats he’s had to wear since arriving last fall.

Outside of his baseball season, which he is currently in the middle of, Devlin played JV for Glynn Academy a season ago while also being the backup for the Terrors Varsity team at Quarterback.

Devlin split time with the JV and Varsity team, which had to be difficult while learning a new system but he never shied away from doing what was asked.

Devlin played both safety and wide receiver for the Terrors, while also learning a brand new playbook, further demonstrating to his teammates and coaches that no task is too big for the talented young athlete.

In just a few months, Devlin has created an outstanding reputation within his coaching staff labeling him as a ‘competitor’, as well as gaining the trust of each one of his teammates. This has earned him the opportunity to lead the Terrors out onto the field on Friday nights.

Hidalgo said “he reminds me a lot of Randon Jernigan with how he carries himself and is able to make his teammates around him better”.

Once again demonstrating Devlin’s will to win, but in the right way. Hidalgo also mentioned that while Tyler is not the most outspoken player, he is highly respected due to the fact that when he speaks his teammates listen.

With such high praise from his head coach, Tyler is hoping to make waves throughout the State with his innate leadership skills and how he demands the best from his teammates every day in practice.

In previous years under coach Hidalgo the Terrors have been known for their offensive attack through the speed option, but look for Glynn Academy to have a few new tricks up their sleeves in the upcoming season.

With an elusive man behind center like Devlin, who likes to think of himself as a Johnny Manziel-Esque’ style quarterback, it allows the play calling to be much more creative.

Fortunately for Tyler. these plays will allow him to get outside the pocket often and showcase his skills with his speed and elusive nature.

Although Devlin is a young quarterback, he has a considerable amount of experience in big games. From starting as a freshman at Frederica Academy to seeing some action late last season in the playoffs, Devlin is looking to put his best foot forward heading into his junior season.

Devlin and his coaches have already begun working on his footwork as well as taking the time to sit down and dissect some film to help slow the game down for a talented young man like Tyler.

After the Terrors finished 8-4 a season ago and lost to Langston Hughes in the second round of the Playoffs, Tyler Devlin still has a bad taste in his mouth and has his sights set on something much bigger for next season. 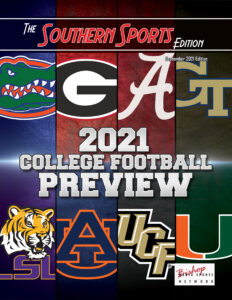